It’s almost NTPRS-time! Tomorrow, Sunday will start the TPRS coaching-for-coaches workshop. I’ll write here about NTPRS 2013 in Dallas and I’ll write it in English, in order that non-Dutch speaking readers can also follow it.

Today I’ll write about my travel and the people i met so far.

Yesterday I left from Schiphol Amsterdam airport and when boarding I happened to see colleague Joyce van Ruiten, who works for the International School in Amsterdam; recently as a french teacher in primary school and next year as a Dutch-as-a-second language teacher in secondary school and she works for TPRS Nederland as a trainer. I didn’t know Joyce was going, so it was a nice surprise !  Like me she will also go the coaching for coaches session tomorrow and it was really a coincidence we happened to have the same flight! We had a good flight; only Joyce got a problem with her left ear when we were landing and she started to have earpain. We arrived at the expected time in Dallas and under a grey sky and with some raindrops we arrived in a SuperShuttle at the Crowne Plaza Hotel Downtown.

My roommate Amanda Damon for this night already arrived – we unfortunately missed each other at the airport. Customs always takes a lot of time:  waiting in a big hall in a very, very, very long row and when it’s your turn handle in the documents, the making of a picture of your face, of your fingers of both hands and thumbs, answering questions about your stay etc. There was kind of a march music in the hall, probably to keep everybody awake and the officers keen but it made me nervous. This year I had a direct flight and so no new ‘body & things’ control again, which was quite a relief. It takes so much time waiting with hunderds of people and having everything checked. 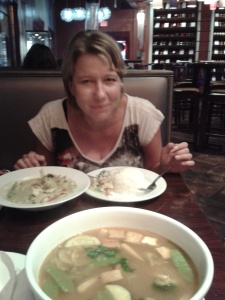 Amanda left a message for me at the frontdesk, which I only found much later by coincidence. Joyce had a room at the same floor as us and after taking a shower the two of us went for a stroll  downtown. It was quite warm outside; the rainclouds had gone and it was sunny. We wanted to stay awake until about 9 o’clock PM local time – a 7 hour difference with the Netherlands. Joyce’s earpain got worse, but fortunately we happened to pass by an enormous pharmacy near the hotel where she bought something to relief her earpain. Today it was already better, but she still felt there is something pressing in her ear.

Yesterday evening we walked to Westend, whith all it’s restaurants and we chose a Japanese/Thai restaurant; a special combination! In the meantime for us is was about 2 o’clock at night, so we were rather tired. We both ordered one dish and mine was incredibly big. After the waiter had brought it, I made a gesture as if I would dive in the huge bowl to take a swim in it. It was a delicious refreshing soup, with the sour taste of lemongrass and lots of crunchy vegetables.

We went back to the hotel and I plumped down on the bed; some time later Amanda arrived and now i know she is a Spanish teacher who teaches in boarding school and last schoolyear was her first year over there. She is one of the persons who are helping Lisa Reyes and Carol Sutton with the organisation.

I already awoke at 4.45 AM this morning, but somehow I fell asleep again and awoke at 8.13 AM again! That was quite a miracle. I must really have been tired… Joyce had been awake for hours and skyped with home, wtached television, looked up information on the internet about airplaine-pain-ears..

This morning I met Lisa and Carol just when they were leaving breakfast to start the preparations for today. Joyce and I went downtown again and visited town hall and again the pharmacy and a mega-expensive store, where they sell super expensive shoes, clothing etc.

I tried to put Whatsapp at my computer, because that’s seems to be the way to communicate with my son. I also succeeded to install it, but now I have to find out how it works… 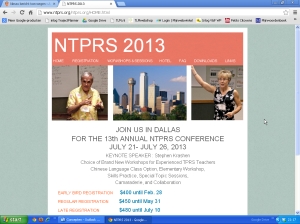